Home » Blog » Blog » What are the benefits of multilingualism in children? 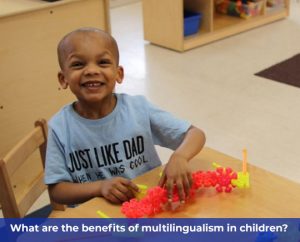 Multilingualism is the ability to use two or more languages effectively. It’s a neat skill that could benefit anyone in every aspect of life. But in the past, bilingualism was considered one of the principal causes of slow language development in children. It’s because most parents used to think that their children experience a language delay if they’ll be learning two different languages simultaneously. Another misconception about multilingualism claimed that it causes split personalities or behavioural problems in children. However, a child’s attitude depends on the people they’re interacting with and situations they’re in, not the language. After all, these are just myths that have been proven false. Plus, child psychologists even found that numerous benefits were predominant in multilingualism. Hence, you have to keep on reading and learn everything you need to know about the benefits of bilingual and multilingual environments for children’s academic success in pre-nursery schools in Noida.

Nowadays, multilingualism has become a significant fact of life in the world. In fact, an open study has estimated that two-thirds of the world’s population grow up in a bilingual environment. Currently, nearly 5,000 languages are spoken in the world’s 200 sovereign nations. So communication among the citizens of many of these countries requires them to be bilingual or multilingual. Even if we consider only bilingualism involving English, the statistics indicate that out of 570 million people worldwide who speak English, nearly 235 million are bilingual in English and some other language. Even in a diverse country like India, where the local language changes every hundred kilometres, common ones like Hindi and English help bridge the communication gap. Hence, we must conclude that multilingualism goes hand in hand with multiculturalism in many cases. While it’s currently a custom throughout the world, it will become a trend increasingly so in the future. Even today, bilingualism or multilingualism has found a significant place in businesses, board rooms, education and nursery school admission.

As one of top 10 schools in Noida, we believe that a multilingual child is more likely to respond to the experiences aptly than others. Every language has a specific set of words, vocabulary and expressions and knowing a varied set of linguistic variables can enlighten the brain further. When children learn to write or speak a language, they connect the sensory experiences with the words and terms to express themselves. While it takes a lot of practice to master a language, it helps ensure higher levels of intelligence. When children acquire information and other skills to learn a language, they sharpen their intelligence quotient by enhancing their cognitive abilities. Therefore, language has a direct association with brain development and intelligence. Here’s how learning multiple languages can help children acquire better IQ over time:

Language enables children to speak their minds or express their needs through various words and expressions. But when children know more than one language, they can perceive multiple words to express themselves better. For example, in English, hunger depicts the need for food, while famish conveys the urgent need for food. So when children know both the words, they can immediately get hold of the right word to express themselves better. It also helps children to improve their level of cognition and do well in their studies.

With the world coming closer through technology, your children need to grow into future global citizens. When children know multiple languages, they can easily communicate with people from other regions. So if children learn more than one language in their formative years, they’ll be able to grab opportunities from worldwide, whether it’s college or career. Also, it’ll be easier for them to establish verbal communication with people from across the world.

Books play a significant part in developing the IQ level of children. But with an understanding of multiple languages, their options in the hidden literary gems of multiple languages becomes wider. The more languages your children know, the more books they can read instead of being confined within the books written in the native language alone. Hence, multilingual children have the privilege of experiencing the world of wisdom without any limitations.