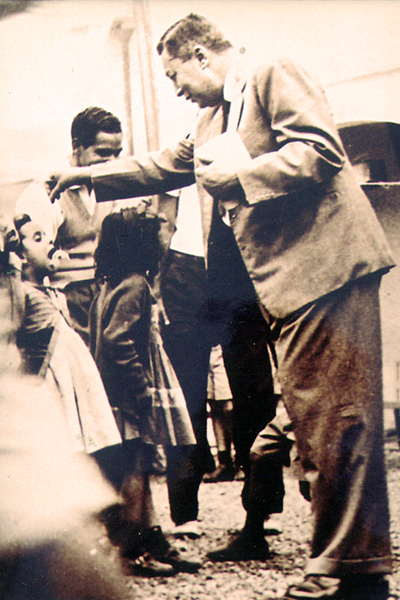 Mr. Alok Chandra Deb was born in 1898 in Dehra Dun and took a Master’s Degree in Literature from Calcutta University before starting work as a teacher with Col Brown’s School and the Gurkha Military Academy. His nationalism was fired by his readings in English, Urdu and Bengali literature as well as by his association with the eminent lawyer and composer Atul Prasad Sen in Lucknow. His experiences as a teacher left him dissatisfied, not only with the curriculum but also with the way Indian students were treated in schools run by Englishmen.

History of the School

Cambridge School was founded on the 7th of April 1931 in a small flat in Qutub Road, Delhi. It moved soon after to 21 Daryaganj and — as it grew – to 2 Daryaganj. By the nineteen forties it had already established itself as one of the foremost schools in the city.

A boarding school by the name of Shishu Niketan was set up in Mussoorie in 1950, moving subsequently to Dehra Dun under the name Raja Rammohan Roy Academy.

Cambridge School Delhi — thus named because it was the first school to send students up for the senior Cambridge examination — acquired its own campus in Srinivaspuri. The foundation stone of the building, designed by the well-known architect Cyrus Jhabvala was laid in 1961 by the Vice President of India Dr. S.Radhakrishnan; and the building was inaugurated by Smt. Indira Gandhi, then the Minister for Information and Broadcasting, in 1963.

Mr. Deb was the Principal of the School till 1964. He himself was deeply read and widely informed but he never left the shores of India. The School’s motto — We Learn to Serve — reflects his deep conviction that a true education is one that reaches its apogee in service to society. That aim requires the development of character, curiosity, and self-awareness, the three main aims of an enlightened school. Mr. Deb continued to work till well into his eighties, rising at five-thirty to give tea to his wife before settling down at his table to work. Cambridge School occupied his entire day, his entire week including Sundays, and his entire life. A strict but kind man, generations of boys, girls and teachers remember him with reverence.

Cambridge Schools flourished under the able guidance and selfless devotion of its founder – Late Mr. A.C. Deb. They are all administered by the Society for the Advancement of Education (SAE) with Dr. Kalyani Roy as its Secretary.

Nestled in a beautiful township, Cambridge School, Noida with its impressive infrastructure, excellent teachers, innovative teaching methodology and students with good moral and educational qualities ranks amongst one of the best schools in Noida. However, it had a modest beginning in 1981 in a small building on a 4 acre land on an invitation from Noida Development Authority. Initially, classes were started for students of Prep to IV with not more than 200 students on its roll. Although, the school had been allotted the site in two parts, possession of the Senior Wing site took time.

Noida wasn’t easily accessible in those days. There were hardly any transport facilities. Very few houses and markets existed. The roads were not fully constructed. Hiring teachers wasn’t easy because not many were keen to travel to Noida. The problems were multifarious.

The first Headmaster Mr. K.B. Mathur (1981 – 1995) left no stone unturned and worked with a lot of enthusiasm to take the school to great heights. Slowly the efforts started paying off. The school grew to a Senior Secondary one and Mr. Aziz Akhtar became the first Principal.

The Senior Wing Building was made operational in the year 1994 and students of Class VI to XII shifted there. The second phase was added in the year 1997 and was inaugurated by Mr. B.P. Khandelwal, CBSE Chairman. A Science Museum, conceptualized by Dr. D.B. Bhatnagar, Retd. Scientist from Bhabha Atomic Research Centre, was inaugurated by Mr. N. S. Tolia, Additional Director of Education. The Third phase saw the inauguration of the Auditorium by Pandit Briju Maharaj ji and unveiling of the Plaque by Mr. A.K. Deb on September 22, 2001. Later a Swimming Pool was added and inaugurated in the year 2009.

The new Junior Wing building with state of the art educational facilities was inaugurated on 3rd March, 2004 by General Shankar Roy Chowdhury(Retd.). The bust of Mr. A.C. Deb, the founder was also unveiled.

The students brought laurels in the academic field. Rachna Gupta topped the school in the Class X CBSE Examination with 83.8% marks in 1989. Ritu Gupta became the school topper with 80% marks in the Commerce Stream in 1991. Tarun Aneja was the first Head Boy and Bala Seth, the first Head Girl (1989 – 1990). The first Science Stream Topper was Ritu Bentick 87.8% in (1992). The first school topper for the Humanities Stream was Kankana Karkun topped the school with 87.8% marks.